Beginning Again with Mary at the Tomb 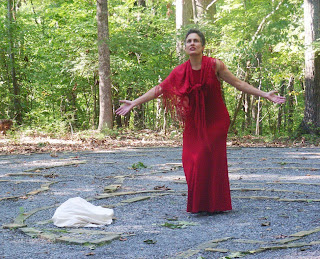 This summer, I had the opportunity to tell and dance the story of Mary Magdalene at the tomb from John 20 on a labyrinth, not once, but twice!

First, I danced for the Feast of Mary Magdalene as part of the early morning worship service on July 22 at Wisdom Ways Center for Spirituality in St. Paul, MN. I was intrigued when I learned that the worship service would take place outdoors on a labyrinth. I have told the story many times in churches, using the altar as the tomb and going up and down the aisles to show Mary's movement to and from the tomb. If you're not familiar, a labyrinth is not a maze with right and wrong turns, but a unicursal (singular) path to the center and then back out again. So, how wonderful to represent Mary's journey to and from the tomb! This innovation represented an opportunity to expand the traveling movements, adding dance interludes to my storytelling, so I asked about a musician. Erika Schwichtenberg who is on staff at Wisdom Ways is a cellist, and the cello seemed a perfect instrument to express Mary's lament: it's so emotionally expressive. Unfortunately, she hurt her hand and couldn't play. But, a wonderfully talented violinist, Kathleen Olsen who plays with the Minnesota Philharmonic, stepped in the morning of the prayer service. She overcame our intense anti-anything-but-cello bias, putting our prejudices to shame. It was fun to work together to figure out musical sounds that would express the very different emotional tones of each of the trips back and forth to and from the tomb.
People responded very favorably to the scriptural enactment/dance/storytelling. My twin (a tough critic even though or maybe because she shares my DNA) said that I made Mary Magdalene "real," bringing her to life. Very human with real emotions, not just a far-away bible character.
I realized, in the middle of it, that I was recounting a story that had originally taken place in the open air: the tomb was outside after all. So, that made the prayer even more extra special.
On another note, I had always been confused by the "stage directions" in the story which have Mary "turning" two times, which doesn't make sense. A woman commented that that was evidence that the story had been pieced together from different sources. Of course! Why hadn't I put that together? Need to do more biblical research . . .

So a couple of weeks later, when I arrived at Simpsonwood, outside Atlanta, for the Network of Biblical Storytellers festival in August, one of the first things I did was check out the advertised labyrinth to see if it would work to tell the story of Mary Magdalene at the tomb. The labyrinth is in an absolutely magical setting in the middle of the woods, so the answer was "Yes!" (Photo by Simon Camilleri is of me telling the story there.) I recruited Dan LeMonnier to play for me, and his instrument is, of all unlikely candidates: banjo. (After having my heart set on the cello and being blown away by the violin, who was I to know what musical instrument would best convey Mary's story?) After I told the story, ending with "I have seen the Lord" and encouraging everyone to join me in those words and movement, Dan and his banjo broke into the catchy, joyful song that he wrote about Mary Magdalene at the tomb, "Begin Again" (available on his CD available through his website and on iTunes). His banjo music is so contagious, many many joined me dancing around the labyrinth in sheer joy. It was wonderful to dance with a lot of other celebratory people. Dan's music helped me feel the incredible happiness that Mary felt after she had seen Jesus again in a way that I hadn't really understood it before. Just sheer utter joy. That's the power of music. And, that's the power of dance . . . to understand on a kinesthetic level. And that's the power of great literature, such as the bible: every time you read a story, you can get something else, new, out of it. And, most importantly, that's the power of love!

The whole adventure of going to the Network of Biblical Storytelling Festival was partially supported by a Community Arts Assistance Program grant from the City of Chicago Department of Cultural Affairs and the Illinois Arts Council, a state agency. Thank you!

On another note: a not to be missed event


It turns out that one of my favorite storytellers from the Network of Biblical Storytellers festival is coming to the Chicago area this week. So, if you’re available, please consider coming to one of the performances of “Elijah” by Simon Camilleri who is touring the states from Australia. The story of Elijah is found in the Jewish Bible (Tanakh or Old Testament) and is significant in Judaism, Christianity and Islam. The script for the show comes directly from account of Elijah from the books of 1 and 2 Kings. All performances ask a free will offering. I’ll be going to the Thursday night performance. If you opt to go to another one and let me know, maybe I'll go to that one, too. I helped arrange these Chicago area presentations because I wanted to see the whole show. This is the bible come to life! Truly wonderful.

While I'm plugging storytellers from the festival, let me put a plug in for Ed Kilbourne who told great stories, in his very understated way, imagining Jesus on earth today.

Posted by Beaulieux at 6:12 AM